So here is our first “Daily Meal Rewind” – What did we eat on Sunday?

Here’s a couple thoughts. Even though we’re doing this for TheLowCarbBlog.com and documenting it – a consistent meal review and weigh-in is not a bad idea. For a long time now – we have talked over what we ate, what we’ve going to eat and weigh-in early every AM (same time – keep it consistent). The idea is to get an “unvarnished” look at what your diet really is. A lot of times you will miss some stuff – and it’s a great time to communicate (Ha!!). 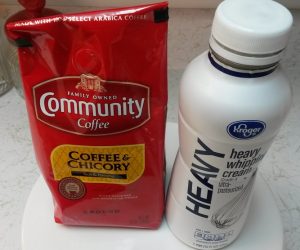 For breakfast yesterday (around 7:30AM) – after a couple of cups of coffee, Community Coffee w/Chicory and some heavy cream – we had a Cottage Cheese/cereal… very fresh – good stuff.

A base of a handful of Pecan pieces, in a fairly small serving dish (any size will do though), somewhere between 1/4 and a 1/2 Cup of Reg. fat Cottage Cheese (beware all the Low Fat stuff – READ LABELS), a slight dusting of some powdered Splenda (or something along those lines) and topped with a large, sliced Strawberry.

Very fresh tasting, kinda’ fills the cereal gap and is good for you. While we are pretty serious about carb counts and it’s important to be realistic – we don’t obsess over fractional carb counts. This one is probably under 5 total grams. Not bad for breakfast. 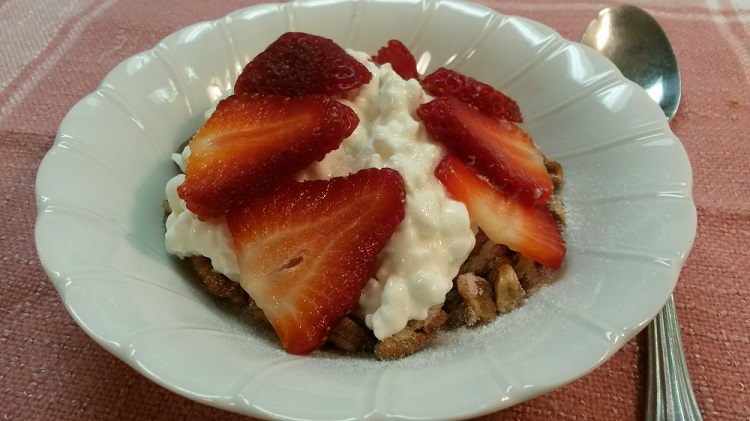 Stir this up a little and ENJOY!! There are tons of different variations on this theme – just don’t go crazy with the fruit. Just enough for a little added flavor.

Why don’t you guys sound off on what we should even call this??

I had a full bowl of the soup. Can I say WOW?!? You wouldn’t think it but Garlic and Onions done this way is really VERY flavorful. While it’s a pretty AMP’ed up Low Carb taste, it’s not the odor repellent you would think. Good taste – even for left-overs. 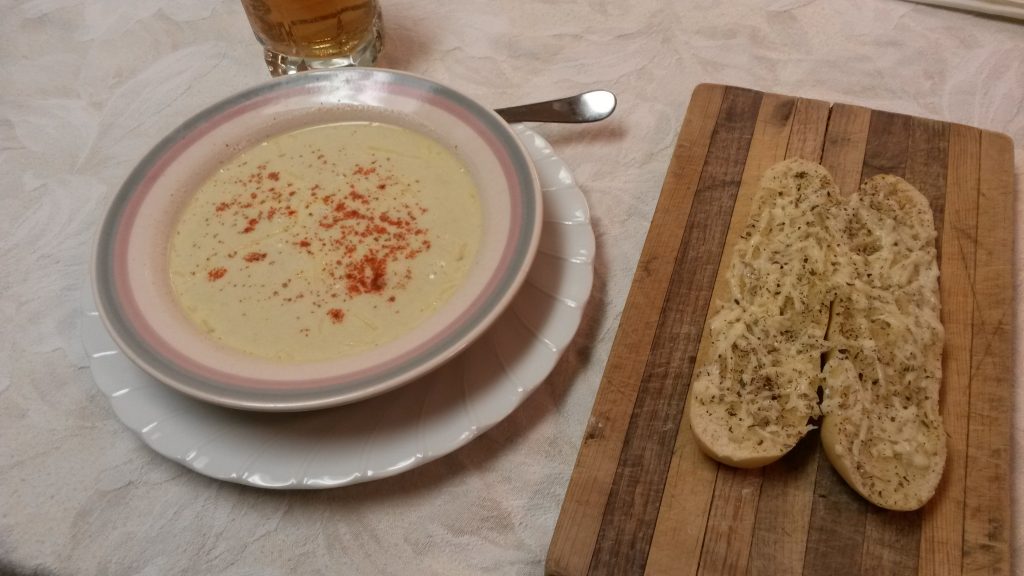 (this was an earlier version of the same soup – lighter, creamier and probably lower carb count. The one referred to here was darker, chunkier and fortified with some Great Low Carb Bread Co. slices – not the carb problem. The MASSIVE ONION AND GARLIC amount was the issue)

However, we started working up some numbers on the twist on the Bayona’s recipe we went with. EPIC CARB FAIL!! We’ve done this one several different ways. I’ll do another version and record the amounts and let you all know how it tastes (BTW – we’ve done different versions of this that were actually better). This version was probably around 20+ grams per serving. Not good!! Mistakes happen – keep on keeping on.

This makes an important point I talk about a lot. We can’t afford to be delusional about what’s actually in the food. No matter where it comes from. One reason we cook a lot of our own meals (not all – but a lot) is I have very little faith in what gets put in our food when we aren’t looking.

For instance, the same goes for those on a Low Sodium Diet. It is VITAL one takes ownership of diet and ingredient choices and even then – there will be bumbles. We’ve been doing this (a Low Carb Diet) successfully for a long time and this still happens to us once in a while.

I am so amused when I hear someone tell me they had a carb-free day. Ummmmmm – no. Not possible. Low carb? Maybe – no carb? Can’t happen. Be diligent. Be real about it. 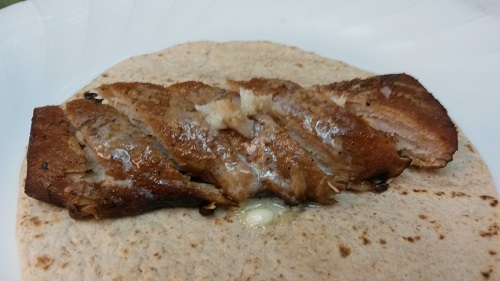 Pro Tip: While that was working – I was toasting off the low carb tortilla – this one was the smallest size Mission brand. About 3 net grams apiece. To toast them off – just toss it on a skillet or flat-top with no sauce and let it warm up a bit. It should develop just a few dark spots – then it’s nice and toasty. Don’t leave it on either side too long. That’s no good. 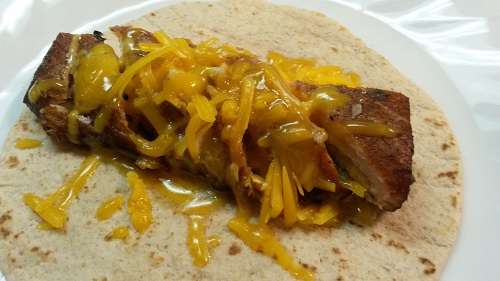 Then add a little shredded cheese… 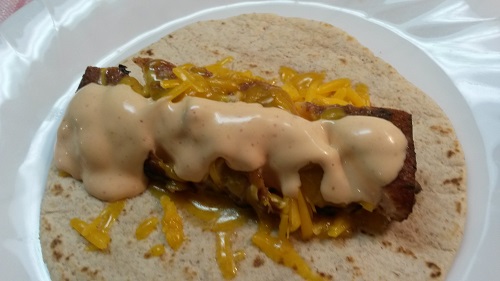 Then spoon on a little of my Sweet Sriracha Lime Mayo dressing… OUCH!! Roll this baby up and enjoy the FLAVOR. This was a ride on the FLAVOR TOWN EXPRESS!! I cannot stress enough when I say this – it is very difficult to find a dish anywhere with this kind of flavor. Really good stuff here.

“Supper” was more like around 4:30 pm and I really just had a few snacks. I was still in recovery from lunch… a little flavor overload. 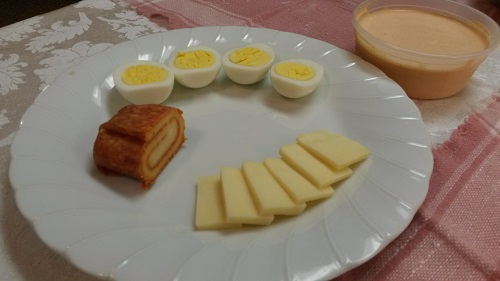 Easy enough to figure out – a couple of hard boiled eggs (we keep these on hand – we’ve got chickens), some kind of hoity-toity pepperoni roll I picked up at Kroger’s and some cheese (I’m sure there were some Pork rinds lurking around in the background too – just begging to dive into that dressing). I’m gonna’ have to track that cheese down again for you. It was good. That is more of my Sweet Sriracha Lime Mayo up in the corner… could there have been left-overs of that??

a generous squirt on Sriracha sauce

a couple of good squirts of Lime juice

Wisk thoroughly and enjoy. This stuff has a life-expectancy of about 14 minutes… Be very careful. Almost anything close to it has a tendency to get dragged through it and eaten. ANYTHING!!

I’ll do an official recipe on this soon – it’s a GO TO… I don’t normally do it that way, but I’ll really focus and put one together soon.

For exercise – I was pretty light. No cardio and I basically just did 50 push-ups (in sets of 5 – relax, it’s not that hard). Exercise is what I can get – with my schedule…

I try to do something everyday – doesn’t have to be much. Just something.

P.S. Quick teaser – the Monday review is gonna’ be Smoked Ribs Day (for lunch). Tune in and check the meal review out!!